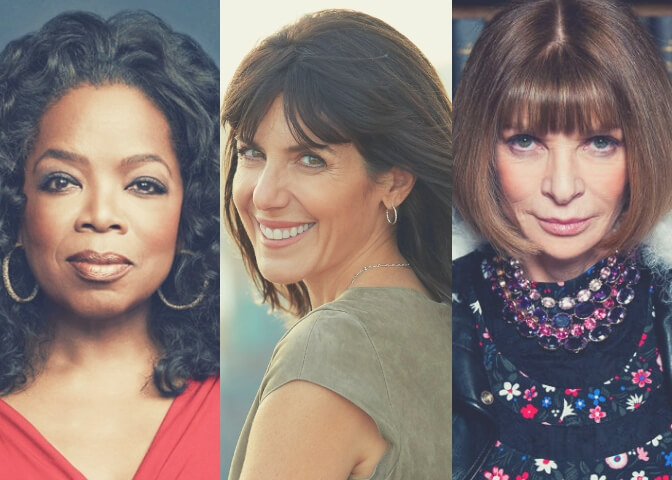 When it happens, getting fired seems like it's the worst thing possible, but Oprah, Anna Wintour and our own Jean have been fired and came back better than ever.

Are high-ranking women more likely than high-ranking men to get the axe? A troubling new study shows that the answer is yes for female CEOs — 45% more likely in fact. The researchers don’t have a lightning bolt of a reason why this is the case, but they do note that it happens even when the company is performing well. But here’s the thing to realize, whether you’re fired from the C-suite or on your way there: There’s hope!

Some of the most well-known and well-regarded women in almost every industry have lost one big job — or big client — at one point in their career. The good news for any of us who may lose a job is that most of them have bounced back to become even more successful. Here are six women who went on to even greater achievements after being fired.

“The editor who had brought me to the magazine had left,” said Jean. “I should have seen the writing on the wall.”  Instead, when her new boss came into her office and started talking about budgetary cuts, offering her the opportunity to keep her column but as a freelancer, she didn’t get it at first. “It wasn’t until I called my husband to tell him what happened that I realized I had just been fired.” Although it didn’t feel like it at the time, Jean says in hindsight it was a gift. Being fired was what led her to double down on supplementing the side-gigs she already had (including the Today show and writing books) with a fuller portfolio of clients — and eventually gave her the confidence to launch HerMoney.

Now the artistic director of Conde Nast and longtime editor-in-chief of Vogue magazine, Wintour had a less successful run as a junior fashion editor at Harper’s Bazaar in the 1970s. After quitting Harper’s Bazaar UK in 1975, Wintour moved to New York City and got hired at the American sister publication. But she was fired after only nine months, in part for her outlandish photo shoots. Wintour recounted the experience to United’s Hemispheres magazine, saying “I was told I would never understand the American market. I did a shoot in Paris, and I remember it very clearly: It was a couture collection, and I put dreadlocks in the model’s hair. It was too much for them. That was the end of me at Harper’s Bazaar.”

Some months later, she became the fashion editor at the now-deceased publication Viva, an erotic women’s magazine that announced its folding in 1978. Once again, Wintour was out of a job. She took a fashion editor position at the now shuttered women’s magazine Savvy before moving on to New York magazine in 1981. Two years later, she was named the creative director at Vogue, and then editor-in-chief of British Vogue. In 1988, she hopped back over the pond and assumed her notorious role as editor-in-chief of the U.S. edition of Vogue. In 2010, Wintour told a fashion conference, “I recommend that you all get fired. It’s a great learning experience.”

While enrolled at Tennessee State University and working part-time at a local radio station, Winfrey received an offer from the Nashville CBS evening news station to be an evening news anchor. She became the first female (as well as the youngest!) African-American anchor in Nashville.

A few years later, Winfrey was hired as a reporter and anchor in Baltimore, an experience Winfrey describes as being marred by sexual harassment, sexism and humiliation. She was fired after only seven and a half months as co-anchor and placed in a much lower profile role on a morning segment reading news headlines. But eventually, she moved to the morning talk show “Baltimore Is Talking,” and, in 1983, was hired to host WLS-TV’s then low-rated, half-hour morning talk show, “AM Chicago.” The first episode with her aired in January 1984. Within months, the show went from last place in the ratings to become the highest rated talk show in Chicago. And the rest is history.

Prior to assuming her acclaimed role as Olivia Pope on the ABC series “Scandal,” Washington had less-successful starts on two other television shows. She was reportedly cast in the shows (which she has not identified); but once the show got picked up, she was fired and her character was recast. Twice in a row. Ouch.

Later, in 2012, Olivia appeared as the signature “gladiator” in the white coat and became the first African-American female lead in a network drama in nearly four decades. But even before getting that breakout role, Washington said she was relieved that she was cut from the earlier shows. The 2013 winner of the NAACP “Outstanding Actress in a Drama Series” award told The Hollywood Reporter that had she maintained roles in either of those two shows, she would have missed out on the opportunity to play Della Bea Robinson in the critically acclaimed film “Ray,” with Jamie Foxx.

She added, in retrospect, “… if only I could have known then what I know now, I would have cried a lot less! Those heartbreak moments … It seems at the time like a my-career-is-over moment, but it makes perfect sense in the end.”

Prior to founding Lucky magazine in 1999, France held editorial positions at Sassy, New York magazine and Spin. When the shopping magazine published its first issue in 2000, the accessible style and cheerful, girl-next-door models were seen as quite a departure from other Condé Nast fashion publications. But when the recession hit, recreational shopping didn’t hold the same priority for American readers and Lucky could not maintain advertising pages.

Other Condé Nast publications reportedly bounced back, but Lucky couldn’t quite recover. France was “replaced” by Brandon Holley, then the editor-in-chief and business lead of Yahoo! Shine, in 2010. Since leaving Lucky, France started her own fashion and style blog Girls of a Certain Age, geared toward women who are beyond their 20s and 30s, described as “all about smart, wearable style for real-life grown women who have long since abandoned the juniors’ department” by Redbook magazine. In 2012, France joined OpenSky, a shopping site, as a curator. That same year, she told WWD, “I don’t think I’m interested in working for or with The Man anymore.”

Kingsley navigated some of the most defining and controversial moments in her clients’ careers, managing DeGeneres’s iconic “Yep, I’m Gay” 1997 TIME magazine cover and engineering Billie Jean King’s coming out press conference in 1981. But after representing Cruise for 12 years, the “Top Gun” star fired her, reportedly for wanting to be more vocal in the direction of his career. She continued to work at the highly esteemed PMK/HBH agency — which she founded as Pickwick Public Relations in 1969 — for five more years. In 2007, Kingsley stepped down from her role as CEO to nonexecutive chairman to focus on clients such as Michael Mann, Jodie Foster and Sally Field. “I won’t have to do any administration work,” Kingsley said at the time of her transition. “I can do creative work with clients, which is the part that I think I do best.” Despite the end of her professional (and personal) relationship with Cruise, she told The Hollywood Reporter in 2013, “Tom Cruise was a prince.”

This Week In Your Wallet: Healthy Relationships
Life is the topic. Money is the tool.